Large Vessel Activity at Naval Base in Hainan China 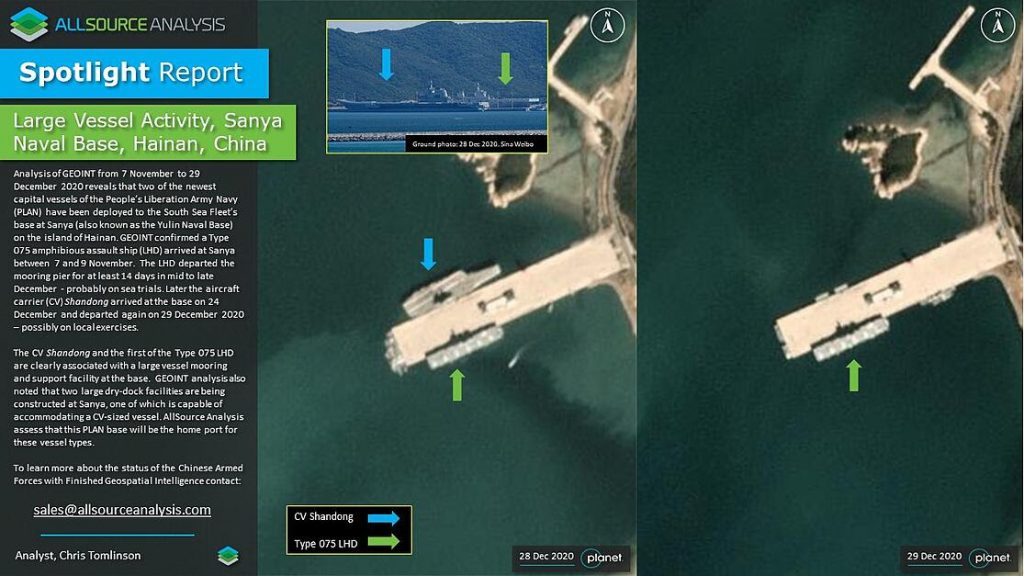 AllSource Analysis has recently published their latest “Spotlight” regarding activity on a Naval Base in Hainan, China.

A snippet of their report revealed:

“Analysis of GEOINT from 7 November to 29 December 2020 reveals that two of the newest capital vessels of the People’s Liberation Army Navy (PLA(N)) have been deployed to the South Sea Fleet’s base at Sanya (also known as the Yulin Naval Base) on the island of Hainan. GEOINT confirmed a Type 075 amphibious assault ship (LHD) arrived at Sanya between 7 and 9 November.

The LHD departed the mooring pier for at least 14 days in mid to late December – probably on sea trials. Later the aircraft carrier (CV) Shandong arrived at the base on 24 December and departed again on 29 December 2020 – possibly on local exercises.

As this is related to the South China Sea and maritime activity, AllSource has given us permission to release this report to our South China Sea Rapid Alert subscribers. Read their full report here.

To receive alerts when we have new reports available, please click the button below. The service is free. You can unsubscribe at any time.